The Innovations for Poverty Action (IPA) Tanzania team was honored to host a field visit to Dar es Salaam’s Makumbusho Market during a recent visit to Tanzania by H.M. Queen Máxima of the Netherlands in her capacity as the UN Secretary-General’s Special Advocate for Inclusive Finance for Development (UNSGSA). The goal of UNSGSA Queen Máxima’s visit was to better understand how digital payments are being used in Tanzania, the costs associated with them, and their potential to help small businesses and other users.

In her role as UNSGSA, Queen Máxima spoke with entrepreneurs and mobile money agents at the market to better understand the impacts of mobile money on the growth of their businesses. She was accompanied by Veronica Kakengi, an IPA Tanzania research associate studying the costs of mobile money transactions.

As part of IPA Tanzania’s ongoing work on digital payments, Kakengi and her team organized a visit to a local market so that the UNSGSA could hear directly from mobile money agents and entrepreneurs about the benefits and remaining challenges of using digital payments.

“It was a professional privilege to facilitate an opportunity for Queen Máxima to speak with and learn from mobile money consumers and agents, hearing about both the opportunities and the daily challenges they face,” said Kakengi. 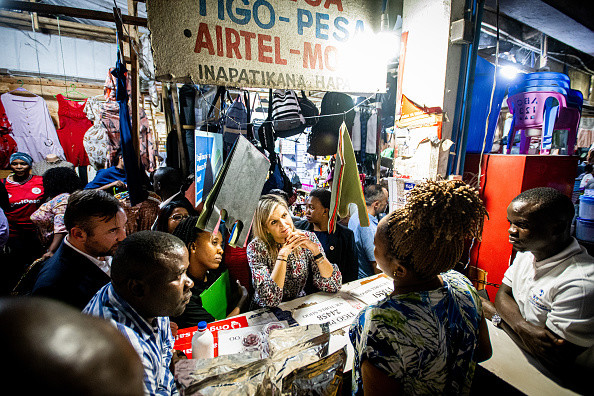 Tanzania has made impressive gains in financial inclusion over the past ten years, from just 17% of Tanzanians owning a formal financial account in 2011 to more than 52% having a formal account in 2021. Much of this transformation is driven by the popularity of mobile money: Tanzanians are adopting mobile accounts faster than anywhere else in sub-Saharan Africa. However, despite the relatively common use of mobile money in the country, many transactions are still done in cash (for example, see this recent IPA blog on digital retail payments in the country), which limits potential economic growth.

Tanzania Country Director Zachary Isdahl says that IPA’s work on digital payments is closely aligned with the goals of the UNSGSA to enable new economic opportunities for Tanzanians through greater financial inclusion.

“We were honored to support UNSGSA Queen Máxima’s site visit to Makumbusho Market. Her interest in strengthening the enabling environment for digital finance in Tanzania underscores the importance of the evidence that IPA is generating for key policymakers like the government of Tanzania and the UNSGSA,” said Isdahl.

Over the next year, IPA Tanzania will conduct research on the drivers of mobile money utilization as part of two global research initiatives. First, IPA’s Transaction Cost Index is building the first index of the true cost of completing mobile money transactions in Tanzania, including listed prices as well as unofficial prices like “off-the-books” agent fees, and non-pecuniary costs such as failed transactions. This research, led by Xavier Giné and Francis Annan, seeks to understand the extent to which the cost of using mobile money is a key barrier.

Second, IPA’s Interoperable Payments Systems research initiative is exploring the impact of interoperable payments on the expansion of financial inclusion and digital retail payments. Led by Constantine Manda, Philip Roessler, Russell Toth, Tiffany Tsai, and Mark Walsh, the research will study the introduction of interoperability, or payments’ ability to operate in conjunction with each other across financial actors such as when funds are transferred from one bank to another. IPA’s research will generate evidence on what works to increase the uptake and use of interoperable payment systems, especially among merchants.­­­