August 21, 2013
Jeffrey Mosenkis
NPR’s Planet Money team had a tour-de-force of stories about cash transfers in the last few days. In the New York Times Magazine, on their Podcast, and in a This American Life story, they profile GiveDirectly, the charity IPA is evaluating, which simply gives money to the poor.  Most charities focus on a particular intervention (in researcher speak), a method of helping the poor like providing clean water or a cow to help a poor family earn income. But the idea behind cash transfers is that perhaps the poor know best how to help themselves. 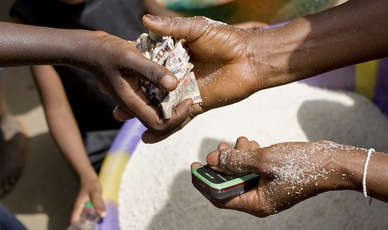 In the Times piece, Jacob Goldstein describes a landmark study of such a program in Mexico:

Cabinet ministers worried that parents might use the money to buy alcohol and cigarettes rather than milk and tortillas, and that sending cash might lead to a rise in domestic violence as families fought over what to do with the money. So [economist Santiago] Levy commissioned studies that compared spending habits between the towns that received money and similar villages that didn’t. The results were promising; researchers found that children in the cash program were more likely to stay in school, families were less likely to get sick and people ate a more healthful diet. Recipients also didn’t tend to blow the money on booze or cigarettes, and many even invested a chunk of what they received.

The GiveDirectly founders learned about studies like these in school, but didn’t know of a charity that made it easy to just give poor people money “unconditionally” – no strings attached. They also didn’t know how effective that would be at helping the poor, so they founded a charity and started giving money to the poor via Kenya’s cell phone-linked payments system. Crucially, they included a plan to evaluate how much better off the cash made recipients. The This American Life story compares a GiveDirectly village in Kenya to another one with beneficiaries of a traditional charity, Heifer International, which provides animals (cows in this village) and training.  The problem is that programs that include training and an asset can be expensive to administer – would people be better off with that much more cash instead?  We don’t know because Heifer won’t agree to be publicly evaluated (in the story, they say that they have been evaluated, but don’t share the full results).
Elizabeth Bintliff, VP of Heifer International’s Africa Programs told This American Life when asked about putting their programs to the test:
Well, let me say this -- I mean, as an African woman, that sounds like a terrible idea. I mean, it sounds like an experiment, and we're not about experiments. These are lives of real people and we have to do what we believe is correct. We can't make experiments with peoples' lives. They're just -- they're people. It's too important."
IPA affiliate Chris Blattman, quoted in both stories, has a blistering response on his blog – as long as they are giving cows to some people and not others, he argues, they’re already experimenting on people but wasting an opportunity to learn from it, by not comparing people who got the cows to people who didn’t. Blattman, who has worked with IPA to evaluate programs that include giving an asset and training (here and here) gives some example numbers (since we don’t know Heifer’s):
But I’ve seen many, many, many projects that spend $1500 training and all the “other stuff” in order to give people $300 or a cow. Is it fair to ask, what if we’d just given them $1800? Or what if we’d given six people cows? Seriously, your one guy does six times better than that?
Using conservative numbers, we could evaluate a program like Heifer International’s for less than one percent of one year of Heifer’s operating budget. It could take just 0.3% of one year’s budget to be able to accurately assess and tell their donors how much more income one of their beneficiaries gets from a donation of a cow, or compare it to giving out cash. We think that’s a good investment.
But to the larger question – why experiment on people?  Shouldn’t people’s dignity be above experimentation? As Blattman already pointed out, charities are already experimenting – just throwing away the opportunity to learn, which is arguably less ethical. The other answer is covered in our new study results also profiled in The Atlantic, and lies in a difference between Conditional Cash Transfers (CCTs), like the Mexico experiment – where people get money conditional on a behavior or milestone – like keeping their kids in school, and Unconditional Cash Transfers (UCTs) – like GiveDirectly, where the money comes with no strings attached.
CCTs are good because the donor or policy maker knows they get two things out of it – the poor people get the money, and achieve a goal – kids’ staying in school, for example. The problem is that they require expensive monitoring and enforcement that GiveDirectly’s simple transfers of money via cell phones don’t. 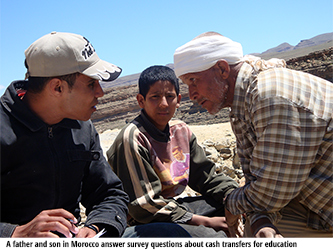 So IPA’s Morocco office tested two versions of a program for transfers linked to education, one traditional conditional cash transfer, conditional on school enrollment, and a cheaper one, that was unconditional, but, as The Atlantic summarizes, came with a nudge:
There was, however, some subtle hinting on the part of the Ministry of Education: For the handouts that weren't tied to preconditions, parents were still made to enlist in the program at the local primary school, and it was advertised with flyers decorated with a picture of a child sitting at a desk. The promotion of education was there, even though it was never made explicit.
So there’s another reason to experiment: what if there’s a cheaper way to get the best of both worlds – the education link of a CCT with the cheaper cost of the UCT?  If all charities and or government ministries thought like Heifer International, we’d never know, because we wouldn’t believe in comparisons.
Fortunately, the government of Morocco decided it wanted to spend its money most effectively – and the researchers found that their new hybrid, Labeled Cash Transfers, worked just as well as a traditional CCT compared to a comparison group (who didn’t get transfers):
After two years, the dropout rate among students enrolled in school at the start of the program in LCT schools was about 7 percentage points lower than the dropout rate of comparison schools (at 10 percent), a 70 percent decrease. Re-enrollment of those who had dropped out of school before the program almost doubled in LCT schools as compared to comparison schools, and the share of students who never enrolled in school fell by 43 percent.
In fact, in addition to being cheaper, LCTs may have worked slightly better than CCTs, with slightly lower dropout and higher re-enrollment rates.
The researchers also tested another convention of CCTs – they almost always go to the mother. But in Morocco they found that transfers were equally effective regardless of which parent received them.
So experimenting tells us that a new way of doing cash transfers may be better and cheaper, and offer more flexibility in which parent is involved. That’s why we do experiments – because we want to know the best way to help the poor. Don’t Heifer International’s donors want to know the same?
Studies:
Conditional Cash Transfers for Education in Morocco
People​:
Jeffrey Mosenkis
Country:
Kenya, Morocco
Program Area:
Social Protection
Topics:
Cash Transfers
Partners:
GiveDirectly, Kingdom of Morocco