It is widely held that access to information is a vital component of democracy building and government accountability. A recent World Bank report[1] champions information as “a tool to empower citizens in developing countries to hold their public agents accountable.” Information flows, the report argues, not only enhance democratic participation, but also make democracy work for ordinary people. However, while evidence suggests that access to information may lead voters to punish corrupt incumbents, it is unclear whether this translates into increased support for challengers and higher political participation. In other words, information about corruption may not improve political accountability, if voters respond to it by withdrawing from the political process.

Despite optimistic views about fiscal decentralization in Mexico, local governments’ performance has remained poor. In 2008, for example, more than 80 percent of municipal governments’ resources were spent either on the bureaucracy or were unaccounted for. While elections should enable voters to discipline their mayors, a single-term limit is imposed on all elected officials in Mexico. Thus, the immediate fate of mayors is determined not by voters but by their political party. To reconcile the single-term limit with accountability, scholars have typically assumed that voters punish or reward the incumbent party for mayoral performance. However, there is little evidence that government performance impacts the subsequent election – previous work shows a strong entrenchment of incumbents from all political parties.

Further impeding voters’ ability to hold mayors accountable are widespread misconceptions about which public works and services municipal authorities are responsible for providing, as well as a lack of available information about the amount of money municipalities receive and how this money is spent. In an attempt to ensure greater municipal accountability, a 1999 constitutional reform established the Federal Auditor's Office (ASF). On a yearly basis, the ASF selects a sample of municipalities in each state to audit. The results of the audits are published in lengthy reports, which are made available online. Though public, these reports are rarely used by media or political parties in local campaigns because the release date of the reports is not aligned with the timing of elections.

Researchers sought to assess the effects of information dissemination on participation in the 2009 municipal and congressional elections in Mexico. Approximately one week before Election Day, flyers with different kinds of information on municipal spending were delivered to all households within the boundaries of treated voting precincts. The first group of precincts received information about municipalities' overall spending; the second group received information about distribution of resources to the poor; and the third group received information about irregular, unauthorized, or unaccounted for spending. All flyers included a subtle advocacy message suggesting that voters raise questions with their mayors about the use of public funds and prompted people to think about the level of governments that was in charge of the provision of public infrastructure services. In total, 150 electoral precincts were randomly assigned to each of the three interventions, for a total of 450 treated precincts and 1910 precincts in the comparison group.

Researchers gathered demographic characteristics from census data, and then collected electoral results for each precinct from the electoral institutes for each state. This information was complemented by a follow-up survey collected ten days after the election.

Information about overall spending: Disseminating information about overall spending levels had no statistical impact on voter turnout when the mayor spent less than 75 percent of available funds. However, it decreased the incumbent vote share by 0.6 percentage points. When mayors spent more than 75 percent of the funds, releasing this information let to an increase in turnout of 1.9 percentage points, but had no significant impact on vote share.

Information about spending on poor: Turnout among voters who received information about levels of spending allocated to poor areas increased by 2.4 percentage points, but only when mayors spent less than 75 percent of available funds on poor areas. Surprisingly, releasing this information had a similar impact on both incumbent and challengers' vote shares - an increase of 1.5 and 1 percentage points, respectively. When mayors allocated more than 75 percent of resources to poor areas, releasing the information had no impact on turnout or vote share. 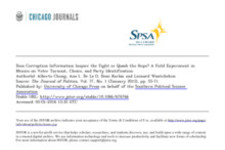 Does Corruption Information Inspire the Fight or Quash the Hope? A Field Experiment in Mexico on Voter Turnout, Choice and Party Identification