IPA Uganda held a successful dissemination event at the Kampala Serena Hotel on Wednesday, August 9th, 2017. At this event, Pia Raffler and Melina Platas, principal investigators of the Meet the Candidates project, disseminated the project's findings. Preliminary findings from the project suggest that watching video interviews of parliamentary candidates during party primary and multiparty elections increases knowledge about the candidates and increases the likelihood that voters change away from their intended vote choice on Election Day. The audience at the event included political party representatives, members of the electoral commission, government officials, academics, and members of the press. A panel session on the role of political debates in Uganda followed the results dissemination. 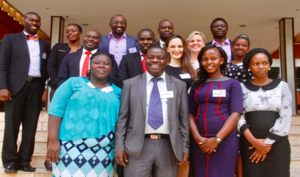